I started writing in 2008 when I attended the ‘Act 3’ page to stage course at Hull Truck Theatre. The group successfully wrote, acted and directed an evening of short plays. Since then I have had a number of short plays produced locally and one or two longer ones short listed by bigger theatres. My play ‘Free to Good Home’ reached the finals of a monologue competition at Cast Theatre in Doncaster.

Scruffy and the Local Valentino

In 2010 the Act 3 facilitator brought in local poet Joe Hakim to do a poetry performance workshop. It’s no exaggeration to say that workshop changed my life for although I had always enjoyed many forms of theatre, poetry wasn’t high on my ‘must see’ events.

We were asked to write a poem on what Hull meant to us. I wrote my first poem ‘It’s good innit’ and quickly followed it up with, ‘Who do they think they are?’ Both of these poems are in my first book ‘A Woman with a View’. When I read my first poem out the following week Joe looked at me and said, ‘That’s good!’ I thought, ‘I think it is! I think it’s O.K.’ I have continued to write ever since.

At the time I was working as a counsellor. One of my clients was being bullied at work. This had gone on for four years. I wrote her this poem and gave it to her after she handed in her notice.

I’m handing in my notice

I’m handing in my notice
I’m on my way – I quit
I’m leaving, I’m resigning
I’ve had enough of it

The sad thing is you’ve just no idea
That you’ve created this atmosphere
Respect has gone there’s only fear
It’s time to change your ways, my dear

I’ve carried my load I’ve done my share
I’ve listened to you spouting hot air
I’ve done a good job and I’ve played fair
Well more than that - I’ve done it with flair.

I’ve had to learn lots of circus tricks
Like jumping around like a cat on hot bricks
How to get you out of a difficult fix
Keeping balls in the air – I’ve done it with six.

I can jump through hoops, I can hop and skip
I can turn cartwheels do a backwards flip
I’ve become an expert at tightrope walking
And balancing acts – well now you’re talking.

I can stand on one leg spin a ball on my head
And oh, by the way - have the lions been fed?
I can act like a clown - for that I’m renown’
Or so I’ve been told after going round town.

I think that this poem says quite a bit
But there’s one last thing before I quit
I’ve managed to rekindle my original grit
You insufferable self-righteous little git.

It is no exaggeration to say that poetry has changed my life. I absolutely love it. I have met thousands of people I would never otherwise have met. I perform regularly for groups such as the W.I., and the U3A. In 2013 I did a six day run at the Edinburgh Fringe with my one woman show, ‘A Woman with a View’. I have facilitated workshops, done library tours and have recently published my fourth book ‘A Woman With A Grudge’. My work is mostly light hearted, frequently naughty, occasionally serious and sometimes political. They often contain a kick against unreasonable behaviour. I write as myself and from my own viewpoint which I believe is reasonably well informed.

My background as a counsellor has helped to shape my work, opinions and attitudes. My childhood as the daughter of a coal miner has helped my understanding of hardship, hard work and the working man and formed the standards and values by which I live my life. 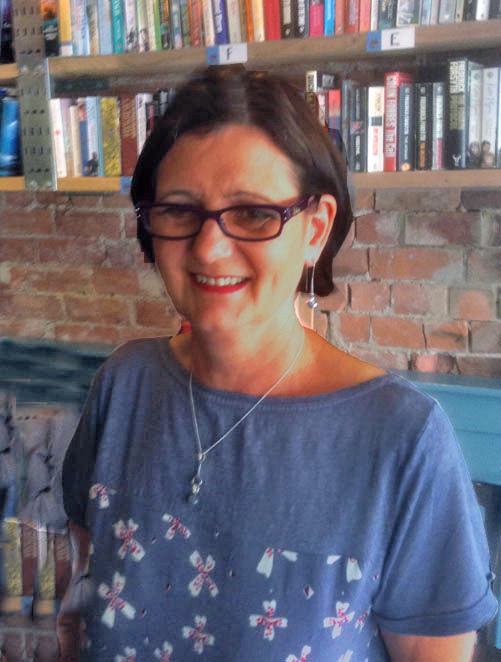 I was born in the mining town of Heanor in Derbyshire. This poem is written in the local dialect. ‘Snap’ was the miner’s word for packed lunch. The miners would take their ‘snap’ to work in a tin which would ‘snap’ when it was opened and shut.

Ay, ’e liked a bet and a trip t’ races
He loved t’ see th’osses put through their paces
I went wi’ ’im wi’ me bag o’ snap
We ’ad ’ard boiled eggs and me dad wore ’is cap

We went t’London, just ’im an’ me
He tuk me wi’ ’im t’see t’Derby
‘Luk at that ar Cath, that’s t’Royal Procession’
Them’s the nobs to the Royal Accession’

No-one is more surprised than me about the change in direction my life has taken.

I reckon it’s good to take a risk every now and again. Do something different. Because you never know what’s around the corner. What opportunities might arise as a result, who you might meet and what doors may open.

I shall always be grateful to Joe for his inspiration and encouragement.